It was winding up to be a normal Friday evening when I received a call from my wife, someone at the school where she teaches had gotten into her purse, taken all of her cash and her iPhone 4. "What do I do?", she asked.

It's a really dangerous game, stealing an iPhone, it's even more dangerous when the owners husband is a geek and fancies himself a bit of a detective.
I immediately told her not to worry, we can get it back. I had been meaning for a few months to install the MobileMe Find My iPhone service on her phone but couldn't wrestle it away from her long enough to do so. However, we have been using Google Latitude for a while and it was functioning fully. I headed over to the Latitude web site and found that it was indeed out of the building and in a residential neighborhood not far from the school. I emailed the image to my wife who, along with one of the best school admins I have ever met (and intimidating as hell), went to pay a visit to the area. The other good piece of news was that it was on and working a little over 30-minutes ago. Time to do some detective work. 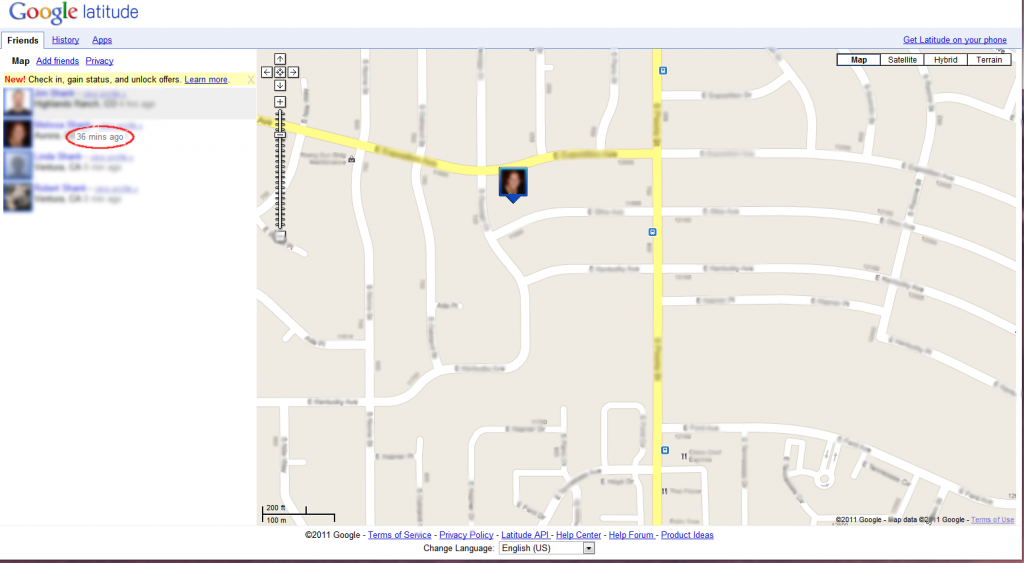 I switched over to hybrid map mode and saw that the GPS didn't have an exact fix but was drawing a pretty reasonably sized circle around 8-10 houses. Google maps are good for a lot of things but finding actual addresses wasn't one of them. A quick search found me a great site, DigitalInspiration.com that will allow you to find the address by clicking on the building location within the map. Within a few minutes, I had 10 addresses, 2 of which were questionably covered by the circle. I quickly called up the on-site team and confirmed the address number. It was time to put names with addresses.

Another one of those big-brother-is-watching sites is your local governments property tax web site. These sites usually will allow you to lookup information on a property with little to no control. I typed in each address sequentially and created a list of owners. I then texted the information to the on-site team.

At this point my job was done. We were into school record territory and absolutely none of my business. A few minutes later I received a call, there was a match. A student in her last period class lived at one of my 10-addresses. This is where we get into delicate territory and it becomes a psychology game instead of a technology game.

When you are pissed and your adrenaline is running high, you imagine all of the pain you want to inflict on the person who took your phone. You fantasize about seeing them hauled off by the police in hand-cuffs and being interrogated under a bright light. Unfortunately, you have to remember that you are dealing with a kid and there is a serious chance that someone else took the phone and put it in this kids backpack as part of a cruel prank. A call was made to the parents and the situation was explained, the phone was stolen and we would be very pleased if it was returned, it was an easy out. The kid comes out the hero for finding and returning the phone and we get the phone back. It played out well. Mom talks to the kid and the kid finds the phone, quickly. My wife and the school admin make a trip out and the phone is returned, it's been wiped, but other than having her Gelaskin peeled off, it's in perfect condition.

As soon as she gets it home, we pop it into iTunes and restore her backup from a few days ago. I immediately activate the MobileMe service and she will start locking it up on Monday.
Posted by Jim Shank at 6:11 AM

Email ThisBlogThis!Share to TwitterShare to FacebookShare to Pinterest
Labels: iPhone, Watch out