I've officially exceeded 500 titles on my HTPC and recently had a scare in which one of the drives in the LVM array started exhibiting errors. I decided it was time to separate the disk from the front-end and put some redundancy in-place. I checked out some of the turn-key solutions like Synology and QNAP. It seemed steep to spend $650 for an enclosure with no drives so I set out to build my own.


The first thing I wanted to do was verify that my assumption of a price premium to turn-key solutions was correct. I hit newegg.com and put together a list of hardware based on some recommended FreeNAS builds:


Not too bad, the whole shebang for about $385 and I get an SSD for the OS. I realized at this point that I have a perfectly good Lian-li PC92 case in the basement with 4 external drive bays, and 7 internals. That sounded pretty good allowing me a grand total of 11 drives. Since I now had a larger case, I was able to use a larger motherboard with more SATA ports. The Gigabyte GA-Z77X-UD5H fit the bill nicely. The other part I wanted purely for cosmetic value and simplicity of maintenance was a few drive docks. I decided on the IcyDock 3 in 2 which brings me up to 13 possible drive bays (the motherboard only supports 9 though). The Chenbro case included a power supply so I needed to spend $50 for a good power supply to reuse my case. This raised the price of the system to $427 but gave me the docks. 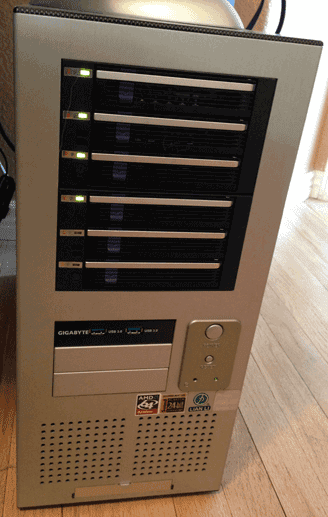 Once all of the part arrived, the assembly went well. Everything connected and fit like it should. I had to do some digging to find the right length and head-angle of sata cables to get everything in place. I lo-o-ove the look of the ICYDOCK and it made identifying drives far simpler. I brought over 4 drives from the HTPC including a WD 640GB, 2 Hitachi 2TB's that I stripped out of an external enclosure and a WD 1TB 2.5". I added 2 WD Red 3TB model WD30EFRX-68A for data and the 30GB SSD mSATA for the OS.


This is where the real research comes in. There are a lot of different ways to do network attached storage. After a few nights of reading on my iPad, I shortlisted the following:


I was back on forth on this for a few weeks before I finally settled on the Ubuntu option. I installed Ubuntu 12.04LTS which was really fast on the SSD then added the SnapRAID and mhddfs package per these guides:


The system works wonderfully. I was able to easily move the drives out of my existing HTPC and recreate the SnapRAID environment without having to copy any data into a new place. I simply copied the existing UUID's from the old HTPC to the /etc/fstab on the new NAS.
Posted by Jim Shank at 4:36 AM