Google Now was the hook. I immediately fell in love with the intuitive and simple nature of the Google Now app and it's great little "cards" that show my next event, how long to get home, current flight status and a whole host of other great information. Google voice search lives up to everything Siri failed to deliver. It's fast, accurate, responsive and informative. I wanted more, but to get more, I had to do the unthinkable, I had to give up my iPhone 5.


One of the Samsung Galaxy S3 phones was turned in at work and I decided to hang on to it and try it out while I was on vacation. I've been a little jealous of the Android crowd and their ability to see so much information at a glance. All I get is a grid of icons with little red-circled numbers, tap, tap tap and I finally get the information I need. With Android, you get a rich dashboard of information in the form of widgets that allows you to layout screens with exactly the information you need from all of your favorite apps without having to launch them. At the top of my home-screen is Google Now with space for 2 cards. I have my days schedule, email for my work priority inbox, a 4-minute timer for french press, my financial status from Mint, headlines from FlipBoard, tasks from Astrid (curse you Yahoo!) and even my current hash rate for my bitcoin miners.

I have Google voice already so adding the Galaxy S3 was pretty simple. Stupid iMessage was the snag to everything. I love iMessage, I hadn't realized how deep the Apple hooks went with this one. I've been publishing my Google voice number for years for texts and calls but iMessage has a way of capturing your actual mobile phone number. After a while, all of your contacts are using your iMessage address to text you and it's hard to get everyone to switch over. I started a small crusade to get all of my friends and family on to Viber so we could keep up the iMessage-like environment on multiple platforms. So far, it seems to be working and it's taking off at work too. 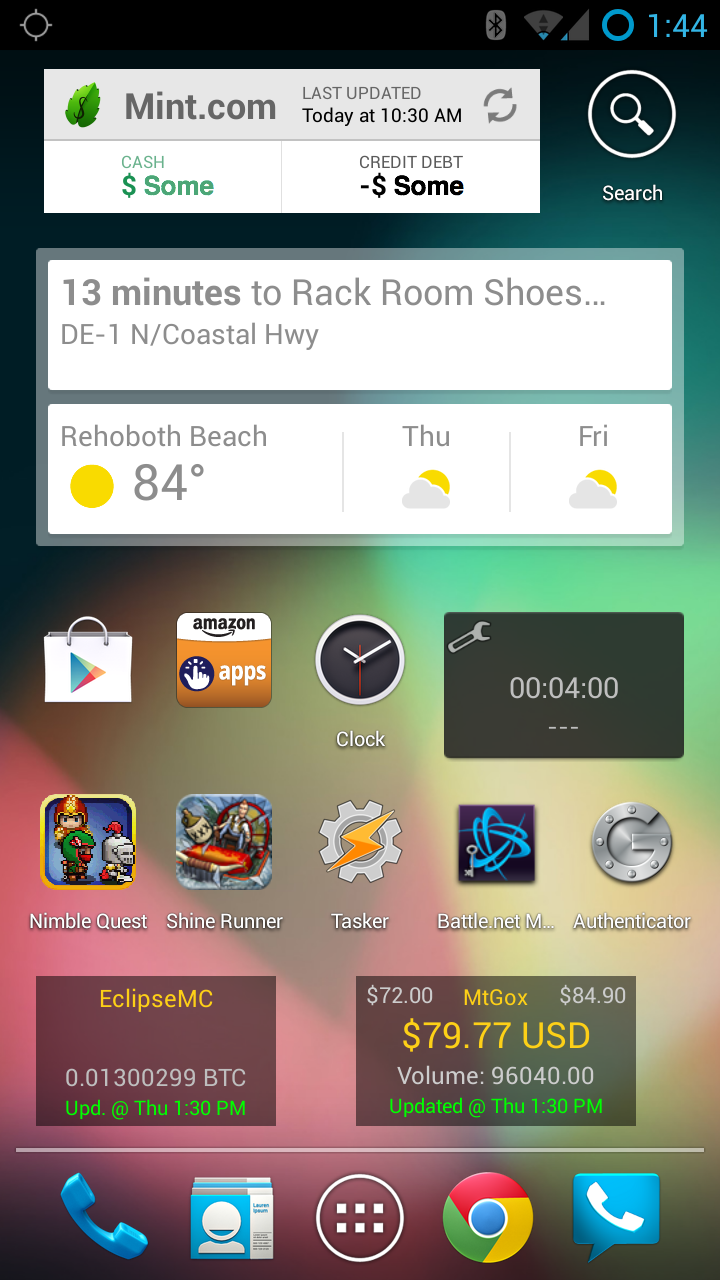 For the first few days I carried both phones and every time I went to my iPhone for something, I would identify the need and find a way to do it on Android. Every one of my daily apps were already available on Android and a few were much better freed from their Apple prisons. I am finally able to handle all of my map links using Waze and all email goes through Gmail although I miss Mailbox and the ability to "delay" messages for later. Since Dropbox purchased Mailbox, I hope to see this as an option on Android someday soon (Update 7/8/2013: Boomerang for Android does most of what I wanted).

Calendaring is a million times easier now that I can accept invites, see meeting room status and move events natively on the Google platform (my work uses Google Apps). I even get notifications of upcoming meetings through my Jawbone Era (something that didn't happen on my iPhone).

The biggest downfall I ran into right off is battery life. It took me some time to figure out that it wasn't actually a problem with the phone or the OS, it was simply use. I've actually stopped using my iPhone so my battery lasts all day! Now that I actually type again (thank you SwiftKey flow), I respond to email, move calendar events and regularly react to information. While iOS 6 added the notification center, Androids notification shade allows you act on the information (pause tracks in Audible, archive emails and snooze alarms).  I still stay plugged in a lot because I've been playing the heck out of Nimble Quest. Speaking of plugs it's so nice to be able to use micro USB for everything. I can charge my phone, Kindle, Jawbone and Verizon Jetpack with the same cable. The whole lightning connector was the reason I went Bluetooth for everything in the first place which is what made the transition a little easier. I've also been heavily involved in playing Ingress which is hard on the battery but great for my health. I've exceeded my weekly activity goal every week since I started playing.

I've taken customization to a new level with the use of Tasker. My phone automatically mutes when I am in meetings, at the doctors office and at Weight Watchers. It unlocks the screen, activates Bluetooth and launches Waze when I dock in my car. It mutes all notifications and launches Dock Clock when I dock on my night stand. I also setup two different icons to show whether it's charging on AC or USB. I've only scratched the surface of what Tasker can do.

This all sounds great, right? Unfortunately, there is a down-side to Android. With all of the apps running and pulling information, stability takes a hit. I get a fair share of "xxx has stopped" messages (Update: Less of these in Denver, seems to have been Sprint in Delaware related). I am running a custom ROM (CyanogenMod 10.1) to get rid of the TouchWiz (BloatWiz?) junk that was slowing down this great device. I was running SmartStay to keep the screen on while I was looking at it which caused no end to problems with anything that used the camera. Uninstalling that seems to have fixed the camera issues.

Apple deserves huge kudos for it's Bluetooth implementation. Like many things Apple, I didn't notice how brilliant the Bluetooth functionality was until I no longer had it. When I connect to Bluetooth in the car and hit the media button on the Bluetooth device, my iPhone would resume the last source I had playing (Pandora or Audible). The Galaxy S3 tries with the addition of the Media Button Router app but crashes Pandora more often than not. Sometimes it will just start playing Google Play Music regardless of what I've configured. I've given up on the ability to tap the button again and get it to pause, something that also worked flawlessly with the iPhone. Maybe it's something I can fix with Tasker or more time, we'll see. I run into the same unpredictability with my Jawbone Era. I was unable to route the audio from my game to my Era for no reason for about 2 hours yesterday. I rebooted the phone, reset the Era and played with all sorts of settings. About 30-minutes later, it just started working. I also can't hold the media button down to get to Google Now like I did Siri, there has to be a way, I just need to find it. From what I've read, Bluetooth isn't natively implemented in Android, it's up to the phone manufacturer. It sounds like this is soon to be rectified in Android 4.3, that would be nice.

There are a few other minor annoyances that are probably more hardware specific. The back-light adjusts to ambient light but does so jarringly, like a flickering fluorescent light that suddenly goes out. Apple's display back-light is so gracefully adaptive it's almost unnoticeable.

Given all of that, I'm pretty sure I'm hooked this time. The annoyances aren't enough to outweigh the conveniences. Thanks to apps like Viber, I am able to overcome the issue of messaging my kids on their iPod touches. All of my daily driver apps have been updated enough that I'm able to do everything I was before. The only loss is iAllowance and there are enough cross platform options that we'll be fine with that one. I'll definitely stick with my iPad for tablet/reader, I think the Android based tablets have a long way to come. I'm up for a device upgrade in the next month or so and I'll most likely go with the Samsung Galaxy S4. The HTC One is very nice but I like the idea of wireless charging and it's just not really an option with the HTC One. It's also really nice to have hardware choices again, it's something I haven't been able to get excited about it a long time. I can't wait to get feedback in the comments!
Posted by Jim Shank at 8:13 AM